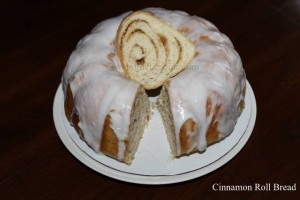 Method:
In a mixer, add everything except milk and mix well.
Next add the milk in parts and mix well until you get a soft but firm dough. If at 1 and a third cups of milk, your dough is still hard, then add some more milk but a tablespoon at a time until you get soft but firm dough.
Shape the dough into a ball and let it rise.
You also need ground cinnamon, brown sugar and more margarine.
Once risen, roll out the dough and then spread some margarine on top then sprinkle some cinnamon powder and brown sugar over the margarine.
Now roll into a log covering the brown sugar, margarine and cinnamon powder.
Now gently place the log into a bundt cake pan and neatly put one end over the other.
Cover and let it rise.
Once risen bake in a 350 degrees oven for about half an hour or until golden brown.
Let the bread slightly cool before icing.

For the sour cream glaze:
3 cups icing sugar
3 tbsp milk
2 tbsp sour cream or cream cheese
Mix these ingredients well until smooth, then pour over warm bread. Leave some glaze for later when serving the bread to pour over sliced bread.
Enjoy!!