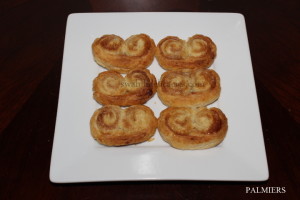 Palmiers:All you need is sugar, cinnamon powder and puff pastry.Mix the sugar and the cinnamon powder together.Next spread the puff pastry into a square and sprinkle the cinnamon sugar all over, now fold one end and then fold the opposite end keep folding until the ends meet and fall on top of one another.Now cut the folded strip into little pieces and place the pieces on a baking try with the cut part on top as shown in the pic.Bake them at 350 degrees until golden brown..Enjoy!!