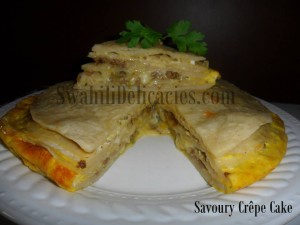 Savoury Crêpe Cake:
Ingredients:
For the Crêpes:
2 cups flour
2 cups water
Ground black pepper..a pinch
Salt to taste..not too much as the keema will have salt as well.

Mix all the ingredients and start cooking the crêpes (mikate ya maji).
On a non stick pan spread some ghee and pour one laddle of the crêpes batter. Cook on low so that you don’t overcook the crêpes..Cook only one side of the crêpe. Once the Crêpes is cooked, remove it from the pan and keep it aside, then repeat cooking the remaining crêpes. I got 5 crêpes out of this batter, I made them a bit thick so they hold the filling.

You also need:
..1 cup COOKED keema (minced meat)..you can use more if desired, I just used sparingly, but if you want more meaty you can use more keema.
..1 cup shredded mozzarella cheese
..3 to 4 eggs..beaten.

Method:
Take a baking pan that fits the size of the crêpes, I used the same pan that I made the crêpes in (mine is oven safe).
Lightly grease the pan with ghee or butter, Place one crêpe then spread some meat on the crêpe, then pour some of the beaten egg over the meat and sprinkle some cheese.
Next layer another crêpe and repeat the process.
Then spread butter or ghee or even egg wash over the top layer of the crêpe ( I just spread ghee) and bake in a 350 degrees oven for about 20 minutes or until the egg is cooked and then put the oven on broil for a few minutes just to give the cake a nice golden colour..
Once the cake is done, remove it from the oven and let it rest for a minute or two, then use a large spatula to remove it from the pan and place it in a serving plate, cut it into wedges and serve hot..
Enjoy!!!