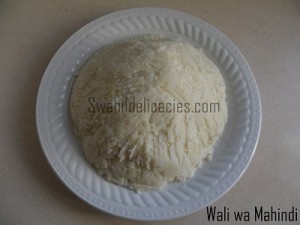 Method:
In a pot, add the 9 cups of coconut milk along with the salt, then bring to a boil.
Once it starts to boil, add the mtele wa mahindi and cook on low heat, stirring only once in a while and gently.
Cook until the liquid has reduced and almost disappeared, then add the one cup of thick coconut milk. Cook for a few minutes then bake in the oven at 350 degrees.
Wali wa mahindi is traditional served with mtuzi wa samaki..
Enjoy!!!