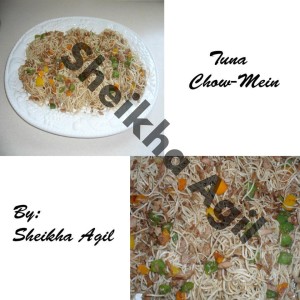 Method:
In a frying pan, heat up the oil and sautée the onion and the bell peppers.
Next squeeze out the liquid from the canned tuna and add it to the frying pan along with the black pepper and salt.
Cook for a few minutes and remove from the heat.
Pour the cooked tuna in another container and keep the frying pan aside to use later.
Now cook the chow mein following the packet’s instructions just remember not to over cook the chow mein because we are going to sautée them in the frying pan along with the tuna.
After cooking the chow mein, drain the water and put them in cold water or ice bath to stop them from cooking.
Next place the frying pan you used to cook the tuna with on a medium heat stove and add oil to the pan.
Next take some cooked chow mein and cook it again in the oil to make it crispy.
Add some of the cooked tuna and mix well with the chow mein.Remember to stir constantly so that the tuna and chow mein doesn’t stick.
After a few minutes remove the tuna and chow mein from the stove and place it in a serving plate.
Repeat the sautéing process with the remaining chow mein and tuna.
Serve with a variety of sauces.
Enjoy!!!